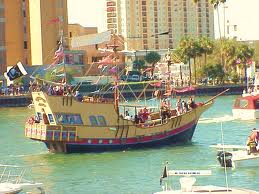 For over 100 years, Tampa, Florida has played host to the Gasparilla Pirate Festival. Each year in late January or early February, “Ye Mystic Krewe of Gasparilla” and the City of Tampa celebrate the legend of Jose Gaspar, a Spanish pirate captain who operated in Southwest Florida. The theme of the celebration is invasion. The Krewe arrives on a 165 foot long pirate ship, the aptly named Jose Gaspar, and is given a key by the mayor of Tampa.

A parade then ensues down Bayshore Boulevard. The krewes throw beads, coins, and other small trinkets to the crowd. The event attracts over 400,000 people each year. There is even a parade for small children, in addition to adult-theme events. Boaters from all over will descend on Tampa in the coming weeks in anticipation of the festival. If you will be among them, make sure to check your engine and top off with Evinrude xd50 oil.