While there is a well-laid set of rules and regulations dictating the proper procedures on the road at all times, much of the marine code of conduct is simply understood. Most of your time on the water will be spent away from other boats, but it is crucial to know the appropriate course of action when encountering fellow seafarers. When passing another boat, be sure to give ample room so your wake doesn’t disrupt them too much; if you are the one being overtaken, slowdown to allow other boater to pass.

Especially if you are boating on a large body of water, it can be several miles to the next refilling station. To that end, I keep extra fuel and Evinrude XD 100 onboard in case of an emergency—either my own or a fellow boater’s. When docking your boat, there is often a lengthy line at the launch. As such, it is important to load your boat on the trailer in a timely fashion and clear the dock for other boaters. Since people can’t take numbers, it is on a first come first serve basis. It may seem tempting to cut in on an open dock, but before you do, make sure you aren’t impeding on someone else.

What is Your Boat’s Fuel Economy? 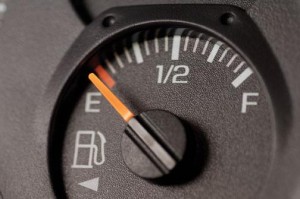 Fuel economy is a determining factor in virtually every automobile purchase, but many people fail to consider this when purchasing a boat. Since the water obviously provides more resistance than the air, boats are less efficient at using fuel than other conveyances; only 13-14 percent of the energy the engine generates is used to power the prop—the rest is lost through heat, vibrations and friction. Most diesel engines will use about 1 gallon of fuel per hour for every 18hp used. Four-stroke inboard engines our slightly less fuel efficient, using 1 gallon per hour for every 10hp used.

Most of our readers won’t like to hear this, but two-stroke outboard motors tend to get the worst fuel economy. There are several variables for two-stroke engines—such as the ratio of fuel to outboard motor oil—so there isn’t a standardized calculation to determine economy.

The engine is unequivocally the most important component of your boat, and as such, it requires a thorough examination. We’ll begin with inboard engines, as the process is more in-depth. Start by changing the bulk motor oil and both the fuel and oil filters. Also ensure that the coolant and transmission fluid are topped off. Even if you’ve just replenished all of your engine fluids, always keep extra onboard. Finish by inspecting the entire system for cracks, rust, blockage and any other signs of corrosion.

Maintenance for outboard motors is more straightforward. Replace the spark plugs and check the wiring for any damage. Lubricate all of the moveable engine components and make certain the gear lube is adequate. When you are finished working on the engine, ensure that the fuel shutoff valve and hoses are intact. Now that you have inspected your boat and done some basic maintenance, you’re ready to hit the water. 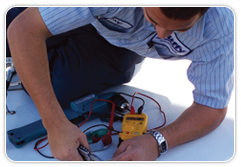 Yesterday we covered the exterior inspection, and now it is time to move on to the more complex aspects of boat maintenance: the engine and electrical systems. Hopefully you charged the battery before you put your boat away in storage, otherwise you may have some trouble getting your watercraft started. Check the water level of the battery and ensure that it will hold a charge. Next, perform a thorough inspection of the gauges and lighting fixtures, as well as verifying that all of the various wires are intact.

Now is also a good time to make sure that you have the proper emergency equipment and extra supplies onboard. Fire extinguishers and first aid kits are a must, as are distress signals and a bailer. Also be sure to keep an extra stock of gasoline and Evinrude XD100 oil at hand for emergencies and incase you come across a stranded boater. We’ll conclude our series tomorrow with a review of both inboard and outboard engines. 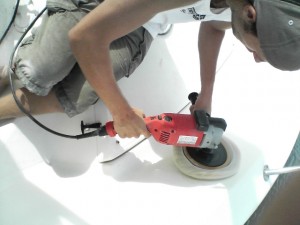 Last week we covered some of the most crucial talking points of boating safety on the water, and this week we’ll be going over some of the most important system checks before leaving the dock this season. We’ll cover the basics like changing your outboard motor oil as well as tips for basic maintenance procedures that can extend the life of your craft.

Begin by inspecting the hull and applying a coat of wax, which will protect the exterior throughout the season. When going over the hull, don’t neglect to check the rub rails, swim platform and the rudder. Also be sure to clean the windows and the metal and wood furnishings. The ground tackle, winches and other miscellaneous fittings and safety equipment should all be examined as well. Now that the exterior is done, tomorrow we will begin to examine the engine and electrical systems. 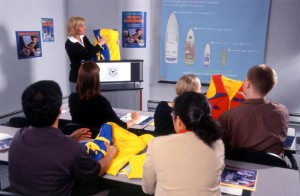 If you have never owned a boat before, enrolling in a boat safety course before hitting the water is advisable—and many states now require you to complete one anyhow. States have varying names for their certifications, but they all indicate the completion of a boating course. These courses can typically be completed online and will cover a wide spectrum of safety information, incldungin transporting, launching and driving your boat. However, you’ll want to spend some time to learn basic maintenance procedures—such as refilling the Evinrude XD100—on your own.

Once obtained, most boating certificates and licenses are good for life. And even if your state doesn’t require it, taking a qualified safety course is never a bad idea. 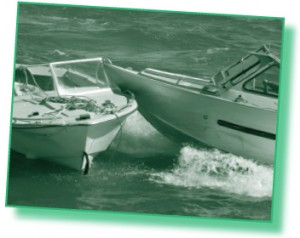 You’re sitting at the dock, refilling your outboard motor oil, when another vessel hits you from the rear, warping your propeller and breaking off a piece of the dock: Do you know what to do? The law has specific guidelines regarding the proper protocol for reporting a boating accident, but less than 10 percent of all non-fatal accidents are ever reported to the authorities. Just as with car accidents, it is important to contact a local authority if you are ever in a boating accident. Laws vary by state, but most require you to report an accident if there is a death, serious injury or damage in excess of $2,000.

When required, you must submit a formal written report of the accident within 48 hours if someone is killed or injured or 10 days if there is only property damage. In some states, the requirements for reporting are more stringent. Contact the Coast Guard or your local boating authority to learn more about the specific laws in your state and find out how to file a formal accident report.

As most people know, a life jacket is the most crucial piece of safety equipment on your boat. Before you leave the dock, be sure that you have a life jacket for every person on board and that it fits correctly. Although many states don’t require adults to wear a life jacket, it’s always smart to err on the side of safety.

In addition to a life jacket, every boater should have a supply of spare parts and tools. This cache should include a basic tools kit and miscellaneous parts for performing routine maintenance on the water, if need be. Always keep an extra supply of gasoline and two cycle outboard oil on hand as well. Even if you never have a need for it, chances are you will eventually encounter an unprepared boater who will appreciate your foresight. 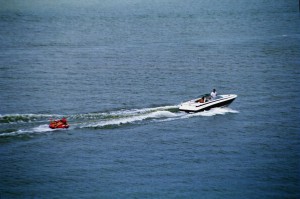 Although a body of water won’t have designated lanes like a highway, there are still laws in place that dictate the proper flow of traffic for boaters. Just as when driving an automobile— in the United States at least— boaters should stay to the right and, generally, work in a counterclockwise motion around a lake or large body of water. This one rule will greatly reduce your risk on the water, but be alert, as other boaters may not be aware of this requirement.

When pulling a skier, wakeboarder or even an innertuber, it is crucial to stay attentive and constantly survey your surroundings. Always have an extra person on board to keep an eye on the person being pulled in case they go down. Keep a safety flag stowed away with your reserve fuel, Evinrude XD 100 oil and other gear; this is used to alert other boaters when there is a person in the water.

Before being issued a driver’s license, every teen undergoes comprehensive classroom training and is required to spend hours behind the wheel. And while boats are just as dangerous as cars—if not more so—many states have lenient laws for boating licenses, or don’t require them at all. When you are on the water, it is crucial to constantly be aware of other boaters and ensure you are doing your utmost to stay out of harm’s way.

Many boat owners can change their outboard motor oil and launch their boat with ease but are unaware of the basic rules and principles of proper boating. Knowing basics such as who has the right away and what emergency equipment to have on board can help you avoid catastrophe on the water. Over the next few days we will be covering some of the main points of safety on the water, touching on specific subjects as well, including driving while pulling skiers and wakeboarders.

Neglecting to change your Evinrude XD100 will cause your motor oil to become acidic. When this happens, the acid in the oil can create corrosive damage throughout the engine. Acidic oil will be thick and black in appearance, so if this is the case, it is an obvious indication that you should be changing your oil more frequently. While oil must be changed at least every 100 hours, it is also advisable to put in new oil prior to storage.

Once the oil has been changed, check the oil filters as well. Since these are one of the main ways that contaminants are removed from your oil and the engine, opt for the pricier models. This is also a good time to check the oil hoses and inspect the rest of the engine for rust and damage. A small amount of rust is normal, but if you find a surfeit, there is probably something wrong. If this is the case, seek out a professional mechanic to diagnose the problem. 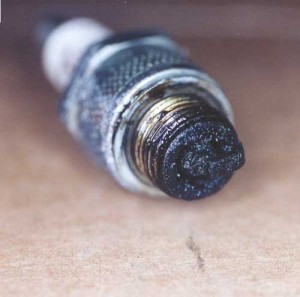 Many people assume that as long as they add coolant to their system they are doing something beneficial for their boat, which is certainly not the case. Before adding coolant to your system, you must premix it and ensure that it has the proper ratio of water to fluid. Adding too much coolant to your engine can cause a sticky mess in the cooling system, while too little coolant has obvious ramifications.

The other main fluid to change regularly is the outboard motor oil, which will begin to develop carbon buildups. When this happens, the carbon that is suspended in the oil is transferred throughout the entire engine. A good rule of thumb is to change your oil every 100 hours, although some boaters opt to do so more frequently. Tomorrow we will continue outlining the oil changing process and conclude our series on engine maintenance.