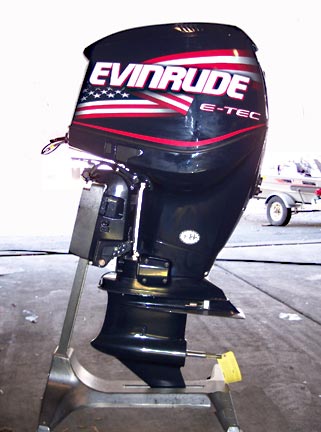 Just a decade ago, the face of the small boating industry was dramatically different. Environmentally conscious boaters were disenchanted with the two-stroke engines of the era – inefficiency and a propensity to pollute had placed them firmly behind their four-stroke counterparts. If that weren’t already enough to signal the two-stroke’s demise, the Environmental Protection Agency set rigorous pollution standards for snowmobiles, personal water craft and other recreational vehicles that utilized two-stroke motors.

The two-stroke renaissance came just in the nick of time – when Evinrude introduced the revolutionary line of E-TEC engines. For years two-stroke engineers had been caught in a serious dilemma – how could they increase the engine’s power while simultaneously cutting emissions? They found their answer in a device known as the Lorentz coil, which had previously been used exclusively for audio technology. The E-TEC fuel injection system also helps keep pollution to a minimum.

Even if the EPA were to place further restrictions on two-stroke engines, the E-TEC could stand pat as a leader in its field. According to one Evinrude executive, the engine only burns 1 percent of the total intake, and the oil doesn’t mix with gasoline. The engine requires very little maintenance, but regular oil checks are recommended. As with any outboard motor, it’s important to keep things well lubricated with Evinrude outboard oil.