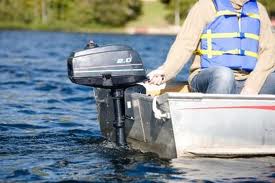 Inside the engine, the two-cycle oil lubricates the engine while fuel pumps through. Two cycle engines are ideal in weed whackers and other small appliances because they do not require very many chambers. The concept is similar on a larger outboard motor that requires two cycle outboard oil.