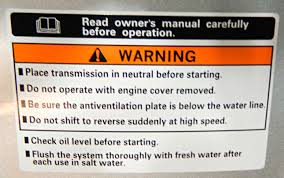 My neighbor recently purchased a small Yamaha outboard motor for a small boat that he had purchased to take out on the lake that is by our houses. Since he doesn’t really know much about boat motors, he has been reading his user’s manual religiously and bringing it with him down to the dock. He follows every single direction that is given to him by the manual.

I watched him struggling to balance the manual while he was also adding Yamaha 2m oil to the motor. I asked him if he wanted any help, since I know a thing or two about motor maintenance, but he was convinced that the owner’s manual would tell him everything that he needed to know. So far he has been doing pretty well with his new motor. I’m just afraid he might crash his boat into something while his nose is buried in the manual.