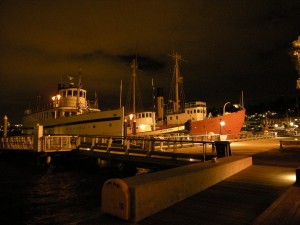 Last week I dedicated a lot of space to Mystic Seaport. This week I’m going to take you to the opposite coast to the Northwest Seaport Maritime Heritage Center in Seattle, WA. Not surprisingly, the Northwest coast has a rich maritime history. In the 1960s a campaign called “Save Our Ships” was launched to save the Wawona, which was successfully bought in 1964.

The Wawona was a three-masted fore-and-aft schooner. It was used as a lumber carrier and fishing vessel from 1897 to 1947. Unfortunately, the Wawona was slated to be towed to a dry dock and dismantled in 2009. The schooner’s masts had already been removed three years earlier for safety reasons. I’m glad I got to see the ship before it was destroyed. When I’m shopping for Mercury 2 cycle oil this week I’ll ask my buddies if they’d like to go check out the Seaport sometime.