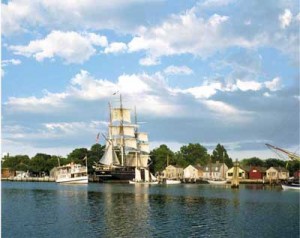 Growing up in Connecticut, I visited the Mystic Seaport and Mystic Aquarium frequently with my family. Though I loved seeing the sea lions and beluga whales, I most enjoyed visiting the collection of ships at the Seaport. Several of the iconic ships have been deemed National Historic Landmarks.

Among the designated landmarks is the Charles W. Morgan. The Morgan was a U.S. whale ship used in the late 19th and early 20th century. It is the only surviving wooden whale ship from the 19th century American fleet. Even as an adult I find the ship impressive, though I’m glad the only oil I have to use on my small boat is Evinrude XD 50 oil, and not whale oil.