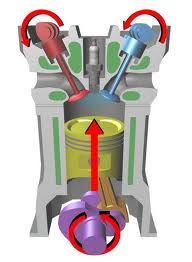 Most devices with lower-power applications—such as gardening equipment, ATVs and small outboard motors—use a two-stroke engine, as opposed to a four-stroke. Two-strokes offer some distinct advantages over their four-stroke counterparts. First, a two-stroke engine doesn’t require any valves. This makes the unit much less complex, allowing for a smaller, lightweight construction. Also, two-stroke engines fire on every revolution, creating consistent power; four-strokes only fire every other cycle.

Finally, two-stroke engines will run no matter which way they are oriented. Because the gasoline and bulk oil is mixed in the engine, both fluids will always be in the system. This isn’t the case with four-stroke motors, where the oil is held is a discrete reservoir. Over the next few days, we’ll be covering the basics of two-stroke engines, including the steps in the engine cycle.