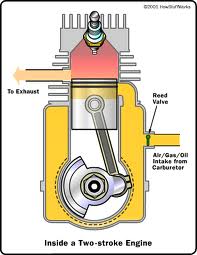 After reading yesterday’s post, you may be wondering why two-stroke engines aren’t used in more applications; after all, they’re lighter, simpler, cheaper and more powerful than four-strokes. For starters, because two-stroke engines are light and powerful, the system takes more abuse and tends to wear out quickly, which isn’t good for machines like automobiles. In addition, the lubrication system in the two-stroke has been simplified so the gasoline and 2 stroke oil are held together. While this is convenient, it doesn’t provide dedicated lubrication to the engine.

The immense power output from two-stroke motors does come at the expense of efficiency. Not only do two-stroke engines burn through oil rapidly, the oil is also expensive in itself. To compound the issue, two-stroke engines also have poor fuel economy. And the burning of all that gasoline and oil means that two-stroke engines emit a surfeit of pollution. During the cycle, fuel and air leak out the combustion chamber as well, posing a particular threat for marine applications.