*Note: this comparison does not include direct fuel-injected two-stroke models.

What is better? An I/O, an inboard, or an outboard? What’s cheaper?

The best answer is… It depends. I/Os are the often the least expensive, and you have the advantage of having a realtively car like (simple) installation. You can get to the engine pretty easily in most boats. The disadvantages are that the outdrive can’t tilt clear of the water, so if you boat in saltwater the aluminum outdrive is always submerged and subject to corrosion. Also, the rubber bellows that encloses the drive shaft, as it comes out of the boat and into the outdrive is usually at least partly submerged. A hole, or tear, in it can sink the boat.

END_OF_DOCUMENT_TOKEN_TO_BE_REPLACED

How Can I Improve My Boat’s Fuel Efficiency? 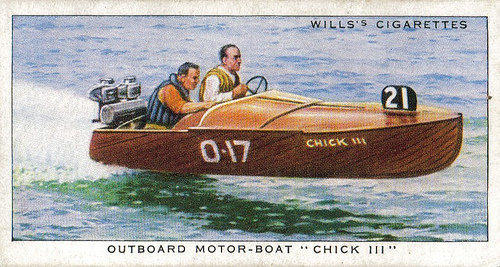 Step 2:
Remove excess weight from your boat. If you have a lot of heavy objects in the boat that you do not regularly use, simply remove them. This can account for as much as a 2 percent reduction in miles per gallon.

END_OF_DOCUMENT_TOKEN_TO_BE_REPLACED

The two stroke engine employs the crankcase as well as the cylinder to achieve all the elements of the Otto cycle in only two strokes of the piston. A quality outboard motor oil like Evinrude XD 50 is more important than ever.

Intake. The fuel/air mixture is first drawn into the crankcase by the vacuum created during the upward stroke of the piston. The illustrated engine features a poppet intake valve, however many engines use a rotary value incorporated into the crankshaft. END_OF_DOCUMENT_TOKEN_TO_BE_REPLACED