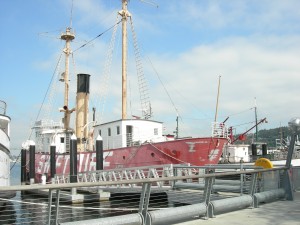 Built in 1904, Swiftsure is one of the oldest lightships in the United States. It is also the only lightship to have its original steam engines. Its journey began in Camden, New Jersey and continued to the tip of South America and back up to the Blunts Reef, California. It was part of a successful rescue mission of 150 passengers whose ship had run aground in a dense fog.

The boat has had other names (it started out as simply Lightship #83) over the years. Its current name refers to the Swiftsure Bank near the entrance to the Strait of Juan de Fuca whish separates WA from Vancouver Island. The Swiftsure is a National Historic Landmark and is currently moored at – you guessed it- Lake Union in Seattle. Yes, my Mercury engine oil purchasing buddies will be hearing about this vessel, too.