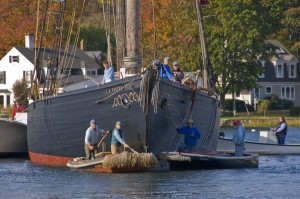 The L.A. Dunton is a schooner housed at the Mystic Seaport Museum. It is of historical significance because it is one of only two remaining fishing schooners built at the A.D. Story Shipyard. The schooner was designed and built as a purely sail-powered vessel – one of the last of its kind. Later on in its life it was outfitted with an engine.

In 1963 the Mystic Seaport Museum acquired the boat and began restoring it. The first project involved returning the rig and stern to their original configurations. By 1985 the Dunton was returned almost completely to an authentic appearance. I find such watercrafts from our nation’s past absolutely fascinating; though, I’m content to have a motorboat that runs on fuel and Evinrude XD 100 oil.